Rex Chapman was active for 30 years with Cathedral Pioneer Church Homes in Sacramento and in Retirement Housing Foundation. From 1977 to 1998, he served on the Board of RHF, and he chaired the Board from 1984 to 1989.

In 1999 he received the honor of Director Emeritus.

Rex died in February of 2000 and, after his death, the RHF Board created the Rex Chapman Award to be given, from time to time, in recognition of outstanding service on behalf of others. 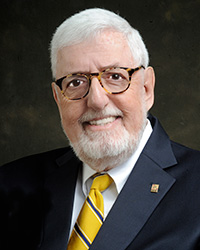 The RHF Board established the Rex Chapman Award in honor of Rex, who served on the Board of Retirement Housing Foundation from 1977 to 1998, and chaired the Board from 1984 to 1989.

The award is not given every year, but when it is given it is to someone who has provided outstanding leadership to the mission of RHF, who oversaw the growth of RHF, and who has had a lifetime and/or singular effect on the success of the mission.

Ray East has served on the RHF National Board of Directors for 24 years and six (6) of those years as its Chair. He lives in Charlottesville, Virginia with his wife, Caroline.

Providing a safe, affordable and nurturing place to live for those in need is of utmost importance to him.  This is the main reason he feels so deeply about RHF’s mission.

After he retired as Senior Graphics Engineer for WRC-TV, the NBC affiliate in Washington, D.C., Ray turned his love for photography into his second career. Although Ray’s contributions while serving on the Board have been numerous, it is his talents in the area of photography that has left a lasting mark on the organization. Many of RHF’s publications feature his photography.

Ray thoroughly enjoys meeting the RHF residents in their communities and listening to their life stories.  He particularly enjoys photographing their beautiful faces in portraits that he can share with them and their families.

Ray also cherishes the friendships he has formed over the past 24 years with both staff, administrators, and Board Members.  Working together with a team that supports affordable housing has greatly enriched his life.

We hope that Ray knows how greatly he has enriched the lives of those who have had the great good fortune to work with him.

In our 59th year, RHF is honored to present to Ray East the 2020 Rex Chapman Award.