Friend of the Elderly

The Friend of the Elderly award is given annually to an individual or organization making a substantial and/or unique contribution to the health, housing, social, psychological, or spiritual quality of older adults’ lives.

Friend of the Elderly Awardees 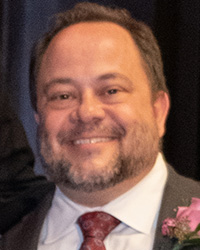 Scott P. Moore is an attorney with the Omaha-based legal firm of Baird Holm LLP and is widely recognized for his work in housing and disability rights law.

Scott served as a senior trial attorney and Deputy Chief in the Civil Rights Division of the United States Department of Justice until 2003. While there he served as lead counsel on some of the largest pattern or practice case brought to the Justice Department.

Since leaving the Department, Scott has represented affordable and senior housing providers. Scott is a sought-after speaker on fair housing and disability discrimination law by the housing industry, disability rights organizations, and federal, state, and local governmental agencies.

Scott serves as a legal specialist for the U.S. Department of Housing and Urban Development’s Fair Housing Accessibility First program.

Scott is listed in The Best Lawyers in America and Superlawyers. He was also recognized in the Lawyer Spotlight by the American Bar Association Commission on Mental and Physical Disability Law.

Scott is married and the father of twin daughters. He is an avid hand cyclist and serves on the Board of Directors of Community Alliance, the AllPlay Foundation, and recently was invited to serve on the Nebraska Ataxia Board.

RHF is pleased to present Scott P. Moore with the 2020 Friend of the Elderly Award.