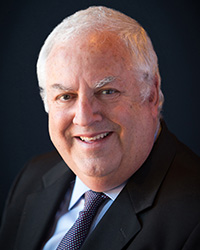 Mr. Amberg has served Retirement Housing Foundation as General Counsel since October 1990. He was appointed Vice President of RHF in October 1992, Senior Vice President in September 2000, and Executive Vice President in 2021. He is a member of the bar of the State of California and various federal courts, including the U.S. Supreme Court.

Mr. Amberg’s duties include responsibility for the Human Resources, Risk Management, Corporate Compliance, and Law Departments. He frequently advises the board of directors, corporate staff, and field management on a wide variety of legal and business issues.

He serves on the board of directors of Caring Communities Risk Retention Group (in which RHF has an equity interest). He also serves on the legal committees for Leading Age (formerly American Association of Homes and Services for the Aging) and Aging Services of California. He previously served on the board of directors of the Council for Health and Human Service Ministries of the United Church of Christ. He has received the designation of Super Lawyer by Los Angeles magazine in 2006 and 2007. He is rated AV by Martindale Hubbell (the highest available) and was recently profiled in the Los Angeles Daily Journal, the daily newspaper for the Southern California legal community.

Mr. Amberg received his J.D. from Lincoln University Law School in San Francisco in 1979. He received a B.S. in Communications from Southern Illinois University in Carbondale in 1974. He is a licensed California Real Estate Broker and previously served as a licensed broker/officer for RHF’s property management entities.

He has previously served as Vice President and Assistant General Counsel for Comprehensive Care Corporation; Staff Attorney for Westworld Community Healthcare, Inc; and General Counsel for Island Resorts, Inc. He was also a partner in Amberg and Townsend, a San Francisco law firm.